In honor of Valentine’s Day, the Mount Sinai Archives looks at Mount Sinai’s ties to one of the most romantic movies of all time, “Love Story.”  Yes, that 1970 classic tear-jerker that made the phrase, “Love means never having to say you’re sorry” a cultural phenomenon.  It was a meme before memes were a thing. 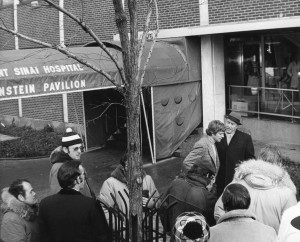 Filming “Love Story” outside of the Klingenstein Pavilion on 5th Avenue, c1969.

So, what role did Mount Sinai play in the movie?  As you know (come on, the movie is 45 years old, there are no spoiler alerts), Jenny, played by Ali McGraw, meets and marries Oliver (Ryan O’Neal) while at Harvard and then falls ill and spends her final days – where else? – at The Mount Sinai Hospital Klingenstein Pavilion.   There is a tense and touching scene at the end of the movie, after Oliver exits KP out onto 5th Avenue, between Ryan O’Neal and Ray Milland, who played his father.

Think this is old news?  Just a few days ago, the Huffington Post ran a piece about how the two co-stars, McGraw and O’Neal, had put in an appearance at Harvard.  Apparently, “Love Story” also means never having to say good-bye.