The Legacy of a St. Luke’s School of Nursing Alumna This is a continuation of a guest blog post by Colleen Stapleton. Colleen is a Patient Navigator with the Liver Education and Action Program (LEAP) at Mount Sinai, where she works to improve linkage to care for patients living with Hepatitis C. You can read the original post here.

My first day scanning, the team and I addressed the technology involved in making our Mount Sinai News collection available online. I learned about the scanning specifications to best archive our newsletters digitally. These specifications included 300 dpi (dots per inch), “do not scale,” and others particular to our scanner.

I also learned how to navigate the interesting physical space of the IT office, where the scanner was placed in a small kitchenette. Since I was scanning during lunchtime, I saw a few lunches popped in and out of the microwave. I learned that I could go ahead and put the precious paper newsletters on a non-descript plastic yellow barrel drum object, but under no circumstances should papers be placed on the potentially wet nearby water cooler!

Starting with November of 1958, I began electronically piecing together our carefully preserved collection of Mount Sinai Hospital history.

Gently unfolding each 60-odd year old newsprint was both a physical challenge and delight. I soon fell into the rhythm of scanning the first page, then the second, then switching to scanning the inserted third and fourth pages. Since the newsletters are not stapled, in total I would carefully reverse the seams of two folded pages, then finish up with the back section of the first folded page.

After a few sessions, I noticed that the newsletters were getting considerably longer – some included 12 pages! This 12-page spread would include a total of three seams, and so unfolding and folding would come to resemble the act of taking apart and putting back together a precious Russian doll.

My first day at the scanner I became aware that any file containing more than five pages could not be sent via email to our Archives team account. I made the decision at this time to scan four pages at a time, sending the files to the Archives account in pieces. I soon saw the stacks of newsletters flowing from the “un-scanned” to the “scanned” pile.

After each session I would return to my desk and make sure every issue was represented and the scan quality was good. The various parts of each issue were then virtually ‘stitched’ together. Though some months came and went without Mount Sinai Hospital News editions, each newsletter is marked chronologically with issue numbers. 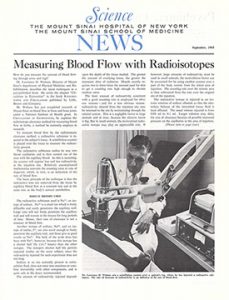 One of my favorite developments in my scanning came with the advent of the Mount Sinai School of Medicine Science News, an insert that was developed as the medical school was founded and produced more and more significant scientific discoveries. There was also the Mount Sinai Medical Center News title change in November-December 1969 to correspond with the newly built school of medicine. The history of Mount Sinai was expanding before my eyes and I had to ensure my metadata reflected these changes!

After scanning part I of the MSH News archive, the team met with the Aufses Archives’ Digital Archivist to clarify our strategy moving forward. We confirmed our goal of making the Adobe PDFs of the News pages available online, creating a digital index of all MSH News electronic files, as well as providing readers with a search function powered by Optical Character Recognition (OCR) to more easily search the newsletter files.

We identified questions to the tune of “How should we put the PDF files online?” and “how can we most easily create an index to the publication?” We ultimately decided to OCR the PDF documents with Adobe and then dump the words into a database program used by the Aufses Archives called DBTextworks. We started with a few pilot issue files and we identified any necessary metadata fields for our project.

So began an exciting new phase: cleaning and inputting metadata. Unfortunately, this was interrupted by the COVID-19 pandemic and the need to stay home, and we have not been able to continue the scanning. However, the work continues with the efforts of a fantastic new summer intern working remotely — soon all of the scanned issues will be described and searchable.

Stay tuned for more blog installments exploring this digitization project along with coverage of the many unique historical Sinai snapshots found in the MSH News! 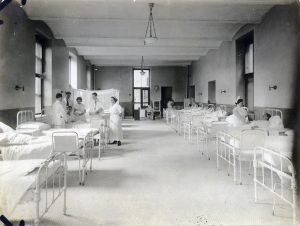