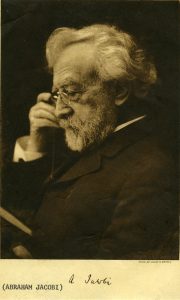 The Arthur H. Aufses, Jr. MD Archives at Mount Sinai is proud to make available two groups of digitized correspondence to and from Abraham Jacobi, MD (1830-1919), the “father of American pediatrics.” Dr. Jacobi was a towering figure both at Mount Sinai, where he chaired the Medical Board for twenty-five years and is the namesake of the Alumni Association’s Jacobi Medallion, and in the broader world of the history of medicine. He was the first Professor of Pediatrics at an American medical school (beginning at New York Medical College and later moving to Columbia), and under his leadership Mount Sinai created the first department of pediatrics at a general hospital in New York City.

This digitized collection is the work of two institutions, the Aufses Archives and the Historical Medical Library of the College of Physicians of Philadelphia, which generously made available scanned images of their own collection of Jacobi correspondence. By bringing together two geographically separated collections whose contents overlap in time and subject matter, this digitization project, which includes full transcriptions of all manuscripts, makes Dr. Jacobi’s story more accessible to scholars and the general public. The Mount Sinai letters are available here, and the Historical Medical Library’s letters are available here.