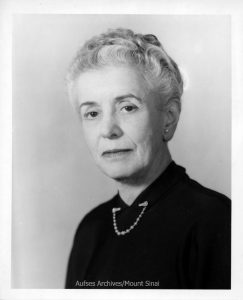 Archives History in the Archival Materials

As a summer intern with the Arthur H. Aufses, Jr., MD Archives, I have become acquainted with Mount Sinai’s history and the efforts that go into preserving its legacy. One of the projects I have worked on is cataloging The Mount Sinai Hospital News, an in-house tabloid-style newsletter for Mount Sinai employees. Colleen Stapleton, Patient Navigator for the Liver Education & Action Program at Mount Sinai, volunteered with the Archives this spring and digitized the newsletters from 1958-71. In my work cataloging, I read some really entertaining stories that offered a glimpse into the personal lives of people who worked in The Mount Sinai Hospital (later Medical Center), whether that be birth announcements of their children, quirky stories about the things employees did outside of the hospital, or articles about celebratory dinners and ceremonies. One can also not forget the hospital’s bowling team.

While cataloging in July, I came across a story that made me pause because it felt like a full circle moment. The October 1971 issue of The Mount Sinai Medical Center News featured an article called “Everyone Talks about Mount Sinai’s Glorious History; Dr. Al Lyons, Arch Archivist, Does Something About It.” This article has history of the Aufses Archives and is within the archive. While the Aufses Archives is a site of historical preservation, it has its own history as well. 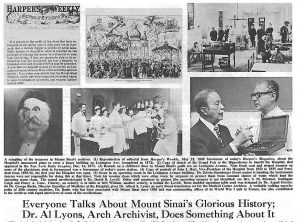 Caption: The objects featured in the article header are still in the Arthur H. Aufses Jr. MD Archives today!

The creation of what is now the Arthur H. Aufses, Jr., MD Archives is due to the work and advocacy of Dr. Albert S. Lyons in the 1960s to 1980s. Over this time, Dr. Lyons advocated for the need of creating the archive and in 1986, secured its future with the hiring of a full-time archivist, Barbara Niss, who remains the Director today. Dr. Lyons (1912-2006) spent over sixty years of his life working at Mount Sinai. He began as a surgical resident at Mount Sinai Hospital in 1938. He went on to become the founder and Chief of the Intestinal Rehabilitation Clinic and worked to help support patient needs post-surgery. He was also a Clinical Professor of Surgery at the Mount Sinai School of Medicine. He wrote a well-known book, Medicine: An Illustrated History, a volume of over six hundred pages, charting medicine from the prehistoric era to the twentieth century.

Beyond his clinical work, Dr. Lyons was committed to Mount Sinai’s institutional history and to history of medicine in general. He taught the History of Medicine elective courses in the medical school. In the 1960s, he convinced the hospital board to collect the institutional history of the hospital. In 1966, he was made Hospital Archivist by Mr. Gustave L. Levy, the Chairman of the Board of Trustees. Dr. Lyons’ passion for preserving the history of The Mount Sinai Hospital overlapped with the discussions and planning of Mount Sinai School of Medicine, which welcomed its first students in the fall of 1968. In 1970, he was given the official title of Medical Center Archivist. Dr. Lyons also contributed a broad range of valuable materials to the Archives, including over eighty-five oral history interviews dating to 1965, a formative time for the field of oral history as well as for the Medical Center, as the School planned for and welcomed its first students.

In October of 1971, The Mount Sinai Medical Center News wrote about Dr. Lyons’ archival work. The article highlights the work and efforts of Dr. Lyons and serves as a call to action of sorts for the archive. Dr. Lyons is quoted in the first line as saying, “When in doubt, don’t throw it out.” He goes on to say that “too much of Mount Sinai’s past has already gone up in smoke,” due to people throwing out items without realizing their significance. He stresses as well that ordinary everyday materials are archival. He stresses that history is not necessarily in the distant past, that the events of the previous day are history. In this sense, Dr. Lyons de-mystifies the archives by showing that it should be in connection with the present moment and is not a disconnected abstract institution. The closing paragraph of the article instructs readers, “If you’ve uncovered some papers or objects you think may be worth saving, are planning some event to make current Medical History, etc. Drop Dr. Lyons a note.” In turn, “He and the Future will thank you!”